Unfortunately, Ellie & Annie can’t type yet! So thei mom has let us know all about them below! Thanks mom! 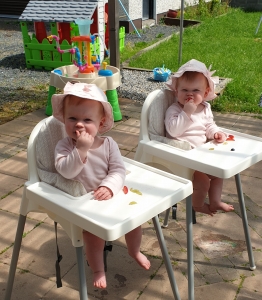 Tell Us A Little Bit About Ellie & Annie

“Their first taste was some sunshine orange when they were roughly 5 months. The girls always seemed satisfied with just their milk bottles which was strange to me because my other two children were on solid foods alot earlier. The twins quickly moved onto carrots and sweet potatoes and then after a week or two they were having whatever dinners I was cooking but just mashed. They always loved mince dishes from an early stage. My little girl Gracie is a fussy eater and I was adamant that the Twins wouldn’t be like that so they got tastes of everything and so far they seem to eat whatever I put in front of them. Just a couple of weeks ago they had lambs liver and devoured it so I’m praying they stay being good grubbers. “

Tell Us About Your Journey Into Motherhood

“I am a stay at home mam of 4 beautiful children, James 8, Gracie 3 and then Ellie and Annie who are 16 months now. I became a mam at a young age of 21. I always wanted children and always felt that that was my purpose in life. Fast forward 5 years and we then had Gracie. Life was great, we now had a boy and a girl, a gentleman’s family as they say but I really wanted to have another baby. After a bit of persuading to the other half we happily fell pregnant again and to our surprise we found out it was Twins. Shocked but so so happy at the news. The worry then kicked in how I would manage with two babies. I tried to just think I will get through it… The twins were then born at 36 weeks perfectly healthy and we got to go home after two days in hospital. And after all the worrying they just seemed to slip into place in the family and were the best babies I could ask for. Always slept and barely cried. I think they were luring me into a false sense of security because roll on 16 months later and I’m worn out with them. Between the fighting and arguing between the two of them and then the strong personalities too, they are also trying there best to start walking and well let’s just say there are many a bruise on them both at the minute! “ 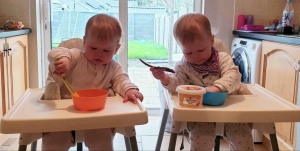 What Are The Twin’s Least Favourite Food?!

“Annie doesn’t like grapes or cheese. Ellie seems to eat everything she takes after me for that lol“

When Do You Find Pipin Pear Comes In Handy For You?

Do You Have Any Funny Feeding Stories?

“The girls copy every thing the other one does so it can get frustrating especially lately because Ellie has began spitting her food out and in turn then Annie does it and I end up covered in their dish lol. “

What’s Your Favourite Dish To Cook For Ellie & Annie?

“My girls both love Shepard’s Pie. It’s an easy dinner to prepare too and always leftovers to freeze for a rainy day“

Spanish
We use cookies to ensure that we give you the best experience on our website. If you continue to use this site we will assume that you are happy with it.OkRead Our Privacy Policy